We are pleased to present more sheet music for free download: Áhkunjárga.

A musical description of Narvik and the four surrounding mountains. The work was a commission for the 50th anniversary of the Winter Festival Week in Narvik 2006. Composed with support from the Norwegian Composers' Fund. The premiere was Narvik municipality's gift for the anniversary.

For: vocals, violin, cello, clarinet in Bb, horn in F, piano and sounds from CD (or sound file).

Read the review of the premiere from Avisa Fremover below, and download the files here.

Beautiful about the mountains

Frode Fjellheim's "Áhkunjárga" was a 38 minute lovely experience. For the ear of course, but also for the eye.

The latter will be credited to set designer Siri Angell Flengsrud and lighting designer Tor Ditlefsen. Their artistic contribution added to the beautiful composition just the little extra that was needed to complete the overall experience.

Four mountains...
Frode Fjellheim has used his experiences in and of the mountains and nature around Narvik as a starting point for his composition.

Four famous mountains, but also four seasons. Each mountain has its own set, all of which are preceded by electronic sounds and loops before the musicians take over.

In the middle, Fjellheim has inserted a beautiful, rhythmic middle piece - where the singer Sofia Jannok yoiked over the theme Áhkunjárga - Tøttas's headland ("Tøtta" a local description of a old venerable lady).

Many styles
Fjellheim is a composer who masters classical, rock, jazz, modernism and electronics. In Áhkunjárga he uses all. In addition to the yoik.

The fourth movement, for example - which describes The Sleeping Queen - begins purely electronically, before shifting towards national romanticism.

The movement in front was built up the opposite Kay; and evolved from beginning sonorous and low-key to moving into rhythmic jazz - before calming down again towards the end.

Narvik municipality could not have given Vinterfestuka a better birthday present .. 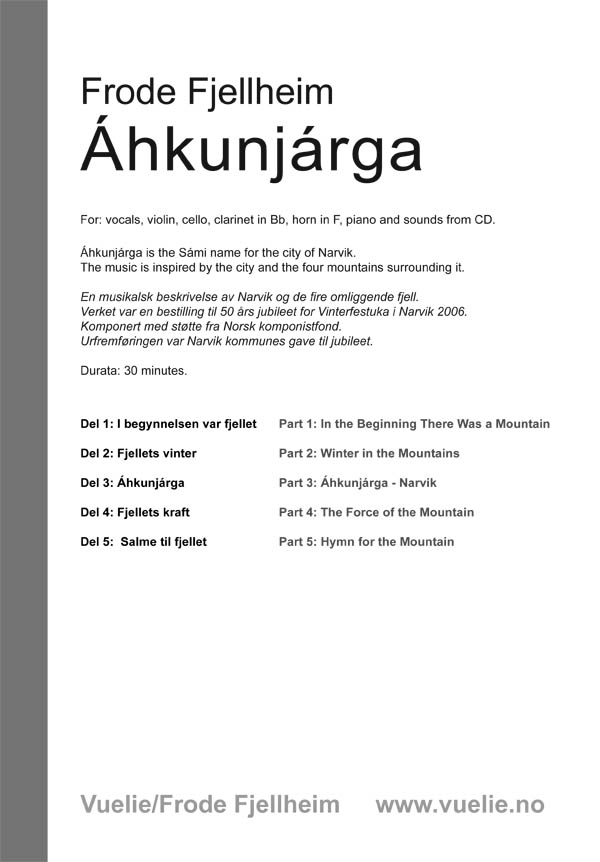