After the premiere at Voss in 2011, Avisa Hordaland wrote;

"The mix of Latin, Norse and Sami texts in combination with Frode Fjellheim's genre- and cross-border world music blended so well together. So natural that you mostly began to wonder why not all masses through all times were written in this way."

Frode Fjellheim released the CD Aejlies Gaaltijein 2004, a musical mass that combined Sami music tradition with elements from European church music. The CD was rewarded with rave reviews and the Spellemann Prize (The Norwegian "Grammy"). "The mix of Latin, Norse and Sami lyrics in combination with Frode Fjellheim's genre and cross-border world music blended so well together. So natural that you mostly began to wonder why not all masses through all time were written in this way. "

Biejjien Vuelie - Solkvad is in many ways a sequel to this. The Sami language and the Sami musical tradition are still present, but here are also elements from Norse poetry. In Norse times, there was probably a strong Sami presence throughout Norway. Many of the writings in "The Elder Edda" were written down during a turning point where European Christian culture mingled with Norse and Sami culture.

The text material is freely composed to show this cultural diversity, and which is part of our history and cultural heritage. Both Sami, Norwegian and Latin have been deliberately used as languages here

"Biejjien vuelie - Solkvad" was premiered at Voss in 2011. The music was a commissioned work for the Osafestivalen that year. Former editor of Spelemannsbladet, Kjell Bitustøyl said in connection with the concert ;.
Is seems like most of what Frode Fjellheim creates turns into gold. And I know something about this, because I have written a lot about him!

On the CD you will find a star team of musicians:

Ulla Pirttijärvi and Frode Fjellheim are performers with a foothold in their respective parts of the Sami area, while Berit Opheim is one of our leading performers in Norwegian folk music. Andreas Aase is a distinctive guitarist who has worked to redesign local traditional music on his instrument. Hildegunn Øiseth uses the godt horn to emphasize the ancient sound on some movements, all supported by Hans Hulbækmo´'s exquisite drumming. 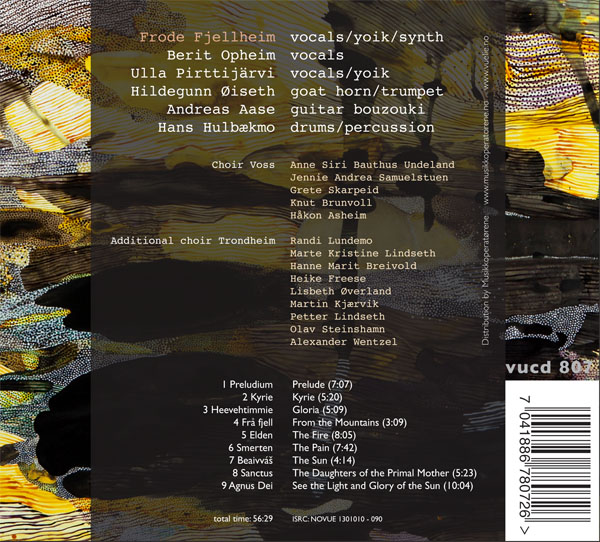 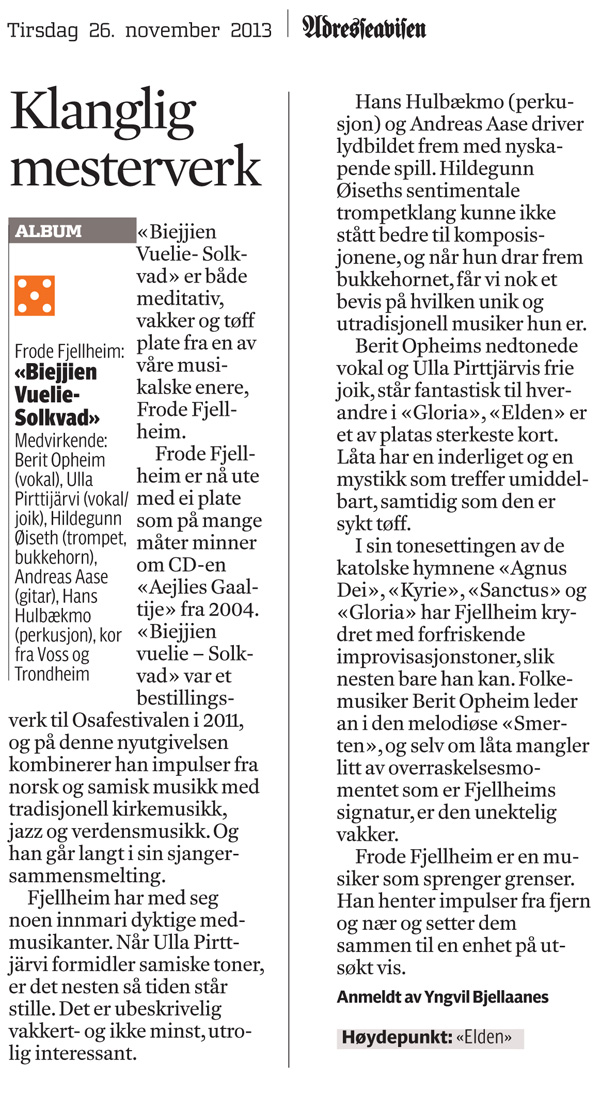 THE WORLD IS NOT SO BAD
For many musicians, the boundaries between world music and jazz are increasingly disappearing. Bugge Wesseltoft and Frode Fjellheim are two of them.

The keyboardist, vocalist and yoiker Frode Fjellheim has Sami roots. In 2004 he gave us "Aejlies Gaaltije", a musical mass that combined Sami music tradition with elements from European church music. It ended with a brilliant reception and Spellemann Prize. "Biejjien vuelie" is in many ways a sequel - a commissioned work for the Osafestivalen in Voss in 2011.

In addition to singing / yoiking himself, Fjellheim brings with him Sami Ulla Pirttijärvi and folk musician Berit Opheim on yoik and vocals as well as Hans Hulbækmo on drums and percussion, Hildegunn Øiseth on goat horn and trumpet and Andreas Aase on guitar and bouzouki. The lyrics are in Sami, Norwegian and Latin and the different "voices" make this a unique experience - sometimes also with a choir that tas recorded later because a lot of this CD tas recorded live at the premiere in Voss.

There is always an atmosphere in the music Frode Fjellheim creates that is unique. As in Bugge's world, jazz and its unique improvisational element are also central to Fjellheim's expression. Both succeed tremendously - in their own way. 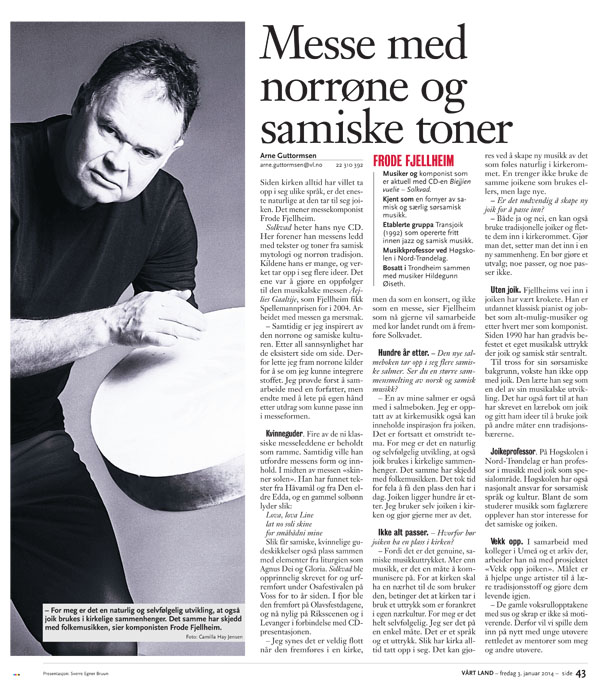 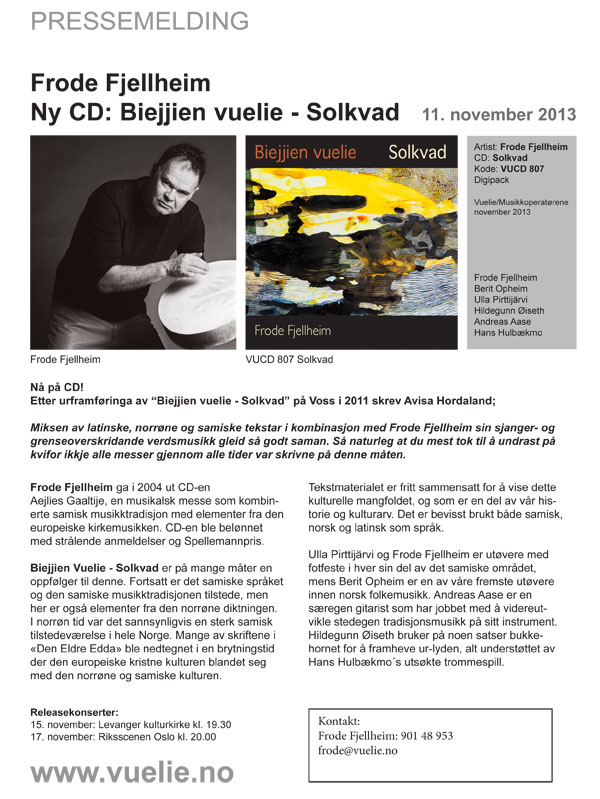